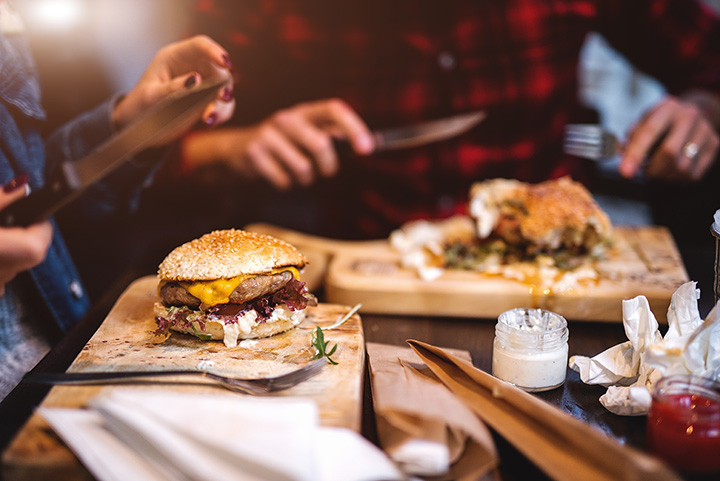 Morgantown, West Virginia, is a classic college town, and sports dominate the landscape, businesses, and conversations. But where do you go when you’re up late at night and the hunger pangs hit? Here are the 8 best late night food spots near West Virginia University that will offer great food, a great selection of brews, and great atmosphere.

Don’t let the look of this little dive bar fool you. They have some of the best chili dogs and steak sandwiches in the area. Serving the local community since 1930, Town Hill Tavern is more than a late-night spot to go for cold beer and food. It’s the social hub of the neighborhood. The small size and the engaging bartenders make this place a welcoming place. You can go almost anywhere for good food and drink, but come to Town Hill Tavern if you want an experience. Open every day until 2 a.m. except Sundays when they close at 10 p.m.

One thing faculty, staff, and students know about is fast, good food and where to find it, and around West Virginia University in Morgantown, West Virginia, they go to Classics 3 Hot Spot Lounge and Restaurant. Around since the late 1930s, this classic eatery is open every day until 2 a.m. except Sunday. With daily food and drink specials, karaoke, and other fun events, you can sip a cool one and watch your favorite game on one of the many large screen TVs there. If watching sports isn’t your thing, they have billiards tables for a friendly game with friends.

When a place has been featured in past yearbooks for a local university, it might make you think that there’s a reason. The oldest bar in the area, Gene’s Beer Garden on Wilson Avenue in Morgantown, West Virginia, has been a favorite haunt for WVU students for years. Popular with locals, too, it has a reputation for one of the cheapest places for good beer, and the food isn’t bad either. Happy Hour and drink specials happen every night, and there’s live music and plenty of beer choices to please the most discriminating taste. This bar is open every night until 2 a.m. except for Sunday when they stay open until 12 a.m.

Located on campus of West Virginia University in Morgantown, West Virginia, the Mountainlair is the name of the student union is a great place to hang out or study and grab a bite to eat with friends. Known as “The Lair” by students, this eatery is open every day until 12 a.m. and Friday and Saturday nights until 2 a.m. and offers late night food options for the hungry. The three floors of the building have a full-size bowling alley, billiard tables, table tennis, a video arcade, and large screen TVs so you never miss your favorite game.

No matter what your favorite beer is, from locally-brewed to national favorites, they probably have it here at the Apothecary Ale House & Café on Chestnut Street in Morgantown, West Virginia. Open until 1 a.m. on Friday and Saturday nights and until 12 a.m. other nights except Sunday, the relaxed atmosphere is the perfect place to bring a date or meet friends for a late-night break from work or study. Whatever brings you here, it’s a great stop and you might not want to leave.

After graduation, Jimmy John Liautaud wanted to start a business that involved great street food. He researched everything from the type of equipment he would need in his restaurant to how to bake the bread used in the sandwiches, and in 1983, he opened his first sandwich shop for hungry students and stayed open late so they could eat. Now, Jimmy John’s is a well-known place to get great-tasting deli-style sandwiches served fast and at good prices.

Considered the center of the universe by WVU students, alumni, and locals, Mario’s Fishbowl on Richwood Avenue in Morgantown, West Virginia, has been serving up brews in large goblets since 1949, earning it the name “Fishbowl” and adding to the well-known history of the place. A three-time winner of “The Best Neighborhood Bar” in Morgantown and listed in “101 Unique Places to Dine in West Virginia,” Mario’s has cold beer and awesome food favorites like wings and Philly Cheesesteaks, fish sandwiches and all-American classics like burgers and fries. Open daily except for certain holidays until midnight on Monday through Thursday and until 10 p.m. on Sunday, you can get your late-night snack and cold brew right here.

Did you know #MariosFishbowl was voted one of #westvirginia 's 101 most unique places to eat? What's your favorite WV eatery? #goodeats #wings #morgantown #eatmorgantown #dishitoutmorgantown

Created out of a desire to offer good food to college students, D. P. Dough has been around since the 1980s. What could be better to ward off the munchies at night than delicious melted cheese combined with your favorite insides like barbecue chicken, pulled pork, steak, meatballs, pepperoni, bacon, sausage, and veggies wrapped inside a baked calzone? Easy ordering online lets you pick up your food when you get there, but they’re open Monday through Wednesday until 3 a.m., Thursday through Saturday until 4 a.m., and Sundays until 2 a.m. You’ll never have to be hungry again.